Parking
Parking will be available on the Festival Grounds for $5.00 per car and free to park at Fairview Plaza Parking lot (Rural King) and ride shuttle. No admission is charged for entrance into the Festival.

Shuttle
The Apple Festival will provide a Shuttle Bus to and from Fairview Plaza parking lot during festival hours.  The last shuttles will leave from the gate at 5:45 p.m. Saturday and at 4:45 p.m. Sunday.

Camping
People wishing to camp during the Festival weekend may use nearby Bixler Lake Campground. For reservations and information, call 260-347-9941 or 260-347-1064. No public camping will be allowed on the fairgrounds.

Information
Festival information is available at the Information Booth (located on the front of the Merchant’s Building) on the Festival Grounds or at the bus stop in Fairview Plaza.  Volunteers will be able to help with all your questions. Be sure to stop by and sign the Festival registry at the information booth during your visit.

First Aid
Noble County EMS will provide first aid services throughout Festival hours and will be located at the Log Cabin north of the Primitive Area. 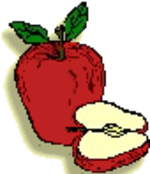 The festival  began in 1985 as the vision of four local organizer, Gary and Kay Shepherd, Barb Kelly and Kathy Baker, who wanted their small town to have a festival.  They began with a budget of $5000 and had to encourage crafters to take part.  The Lion's Club was the first food vendor to sign-on and that first year there were only six antique dealers on the festival grounds.  At one point the group wondered just who would show up, as it seemed most of the town was working at the event.  Much to their relief, when that weekend finally arrived, a steady stream of visitors pulled into the Noble County Fairgrounds.  The cars have been coming ever since.  Over the years the festival continued to grow, branching out into different areas, each section headed up by a team of volunteers.  A large children's area with games, activities, crafts and rides.  A primitive traders village, demonstration buildings, a Civil War encampment and entertainment on 3 stages have all been added over the years.  Today the festival budget is over $80,000, and the festival hosts some 70,000 visitors each year.  Nearly one hundred crafters sell their wares at the festival and antique dealers fill the Merchant's Building.
The Apple Festival Committee has grown from those first four brave souls to 20 caring volunteers who strive to maintain the quality and affordability of this period festival.  The Mission of the Apple Festival is the same today as it was in 1985, to Entertain and Educate visitors about our American Heritage.
View on Mobile
http://www.kendallvilleapplefestival.com/